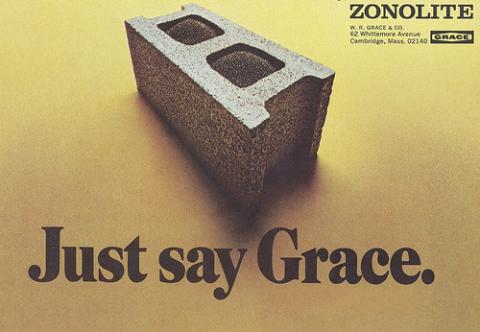 Just when you thought you’d heard the worst about asbestos, more bad news has broken. According to a report recently published by the Canberra Times, it is believed that thousands of Australians may have been exposed to an American insulation product at the centre of one of the world’s most costly asbestos scandals.

Zonolite insulation, an American vermiculite tainted with a lethal form of asbestos known as tremolite, has already been linked to hundreds of deaths in the United States. It’s been revealed that the product was sold in Australia for more than fifty years. So broad was the product’s reach, it’s believed that an estimated 824 cubic metres of the matter was painstakingly scraped from the underside of the roof of the Canberra Centre in 1988.

Even more worrying was vermiculite’s residential use, with the product being installed as a fire-resistant coating on many suburban buildings.

While many Australians have heard of Mr Fluffy—the insulation business that installed “loose fill” asbestos insulation in thousands of homes in the 1960s and 1970s—few have heard of vermiculite. While the company Zonolite may have flown under the radar so far, it is now believed that the American company may be responsible for exposing thousands of Australians to potentially harmful insulation materials.

In brief, Zonolite Insulation is the trademarked name of a product sold as attic insulation between the 1940s and the 1990s. Consisting of the naturally occurring mineral vermiculite, Zonolite was used for decades to insulate millions of American homes.

The insulation, most commonly found in attics, was usually grey-brown or silver-gold in colour, and exhibited a rough pebble-like texture. As far as building materials go, Zonolite was lightweight and incredibly fire-resistant; a fact that appealed greatly to the construction industry.

While not all vermiculite contains asbestos, it is now known that Zonolite insulation was heavily tainted with the dangerous ingredient. As a result, Zonolite may prove harmful to those occupants who reside in homes where the material has been used.

Who is to blame for Zonolite’s toxic touch?

The history of Zonolite insulation can be traced back to the early years of vermiculite mining. American businessman E.N. Alley owned vermiculite mines in Libby, Montana, where much of the mineral was mined during the 1900s.

Years later, in 1963, W.R. Grace purchased the vermiculite mine from the Zonolite Company. After the takeover, it is estimated that the company processed nearly 200,000 tons of vermiculite each year, until its eventual closure in 1990.

It is said that the executives of W.R. Grace were fully aware of the risks associated with asbestos exposure and did nothing to protect their workers, allowing their employees to fall ill.

Today, Zonolite insulation endangers not only past workers of the company, but those residents living in homes containing the product.

What are the dangers of vermiculite insulation?

The majority of the vermiculite mined for Zonolite was found to contain some of the most toxic forms of asbestos, minerals known to cause mesothelioma. According to reports, large traces of tremolite asbestos were found in portions of the vermiculite, elements that had the potential to be ten times more carcinogenic than chrysotile asbestos (the mineral’s most common form).

Tremolite is today responsible for hundreds of cases of asbestos cancer throughout the world, including Australia as well as the United States. Why? Tremolite boasts sharp, needlelike fibres that can easily enter the respiratory system when airborne, making it a particularly toxic form of the mineral.

Are Australians at risk of exposure to vermiculite insulation?

Some estimates have projected that as many as 35 million U.S. homes, buildings and offices contain Zonolite insulation. However, there is no official record to suggest how many Australian buildings and/or residents may contain the product.

Despite its moral and legal obligations to do so, it has been alleged that W.R. Grace has taken no steps to make Australians aware of possible ill-effects from its products. The company is also yet to provide details for information about the specific amount of Zonolite shipped to Australia since the 1920s, as well as where the imported vermiculite was processed.

Despite W.R. Grace’s secrecy, this is what we know:

While it is now illegal to use asbestos as a building material, stories like the Zonolite Insulation scandal remind us that past construction projects still have the potential to cause Australians harm. Whether you are renovating, demolishing, or rebuilding your workplace or your home, you need to take precautions when there’s a chance you’ll disturb pre-existing asbestos containing materials.

By offering asbestos inspections,asbestos surveys, air quality monitoring, clearance inspections and asbestos registers and management plans, we can make sure you’re not exposing your family or your employees to unnecessary risks.