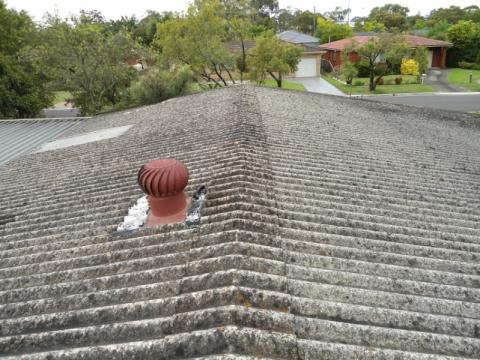 Corrugated asbestos roofing is thicker than corrugated iron, has a matte finish, and takes on a weathered appearance over time. It’s a familiar sight throughout Australia’s suburbs, especially those built in the postwar “fibro belts” in areas like Western Sydney.

Unfortunately, that weathering over time isn’t just cosmetic. It’s a sign of changes in the structure of the material. Asbestos roofs start to disintegrate after years of being exposed to the sun and rain – not to mention the hailstorms that are a regular feature of life in Sydney. By the time we at Airsafe see an asbestos roof, it’s often begun to disintegrate to the point where dust particles are collecting in gutters, waiting for a strong wind to make them airborne.

Should I get my asbestos roof removed?

If you have an asbestos roof, you’re probably wondering whether it’s worth the expense to have it removed and replaced with asbestos-free material.

There’s currently no requirement in NSW to remove asbestos roofs, so the decision is yours. Obviously you will need to take into account the cost of removal and replacement. However, you should balance this against the factors in favour of having your asbestos roof removed:

We’re often asked about an alternative to removal called encapsulation. This isn’t something we recommend – if roofs have existing weathering, encapsulation doesn’t work well, and it’s only ever a temporary solution.

So let’s say you decide to have your asbestos roof removed and replaced. What kinds of precautions do you need to take?

You should treat asbestos roofing as friable

When it was originally installed, asbestos roofing was bonded asbestos, but over time it can become friable. This is confirmed by SafeWork NSW’s Safe Work on Roofs Code of Practice:

If fire, hail or water-blasting damages bonded asbestos, or the material is showing signs of wear from water and age, it may become friable asbestos material.

Existing asbestos-containing roofs are now nearly 30 years old or more. They have all been subject to weathering by rain, sun, wind, hail, air pollution, moss or lichen growth and salt (for coastal properties). Weathering erodes the cement matrix from around the asbestos fibres, allowing more ready release of those fibres as they lose their binding or are more easily exposed to breaking off.

Also, as the roof ages and the sheet thickness reduces, it becomes both weaker and more brittle, and so more prone to collapse from physical damage. Not only can this mean people fall through the roof from walking on it, but the roof will more easily break from other causes, such as hail or falling branches, and so release asbestos fibres.

Precautions to take with asbestos roofing

Above all, we want to stress the importance of air quality monitoring if you’re having an asbestos roof removed. The fact that dust from damaged roofs tends to collect in gutters, potentially putting you and your neighbours at risk, means you simply have to make sure asbestos fibres aren’t circulating in the air around removal works. If your asbestos removal contractor tells you air monitoring isn’t required, you need another contractor, it’s that simple. (If you’re in Sydney or NSW, contact Airsafe for a recommendation.)

Similarly, to get peace of mind once you’ve had your asbestos roof removed, have a professional clearance inspection from one of Airsafe’s experienced, qualified asbestos inspectors.

At Airsafe, we believe asbestos roofs are a significant risk to Australian communities. We’re lobbying the authorities to tighten up the rules. In the meantime, you can protect yourself, your family and your neighbours by following the precautions we recommend.