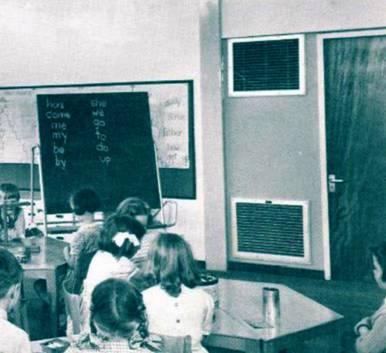 Given the widespread use of asbestos by the Australian construction industry before 1980, there are rising concerns about the presence of the potentially toxic mineral in many of the nation’s schools.

And Australia is not the only country with these concerns. The Guardian UK has reported that more than 75% of the country’s school buildings contain asbestos and that many—predominantly the vast number that were built in the three decades after the second world war—are now coming to the end of their days. The Guardian states that, according to the Local Government Association, disputes over asbestos removal from school buildings are holding up a significant number of projects related to school renovations and redevelopments.

Asbestos in schools a widespread problem

That three-quarters of schools in the UK contain asbestos should come as no surprise, given the prevalence of the use of the material in the 20th century. Nor should it come as a shock that other nations around the globe are facing similar concerns. According to the US Environmental Protection Agency (EPA), asbestos-containing materials reside in many of the approximately 132,000 primary and secondary schools in the United States. It seems that schools in the United Kingdom are not the only ones who need to be concerned.

In February, ABC News reported that hundreds of schools in the state of New South Wales could be contaminated with deadly asbestos. To add to the concern, a government expert had warned that authorities were using band-aid measures to clean up the problem. Aware of the dangers of asbestos, parents told the ABC that they feared for their children’s safety, because of repeated exposure to fibre asbestos sheeting used as landfill in school ovals and playgrounds which, in some cases, had been cleaned up multiple times.

Asbestos clean up in schools not good enough

The ABC report cited Manly West Public School on Sydney’s northern beaches as a place of particular concern. The grounds have been cleaned up three times after fragments of bonded asbestos were discovered on the school oval in 2012.

After the first two attempts at clearing all traces of asbestos were unsuccessful, the Manly West P&C took it upon themselves to raise tens of thousands of dollars to pay consultant Col Scotts to clean it up for a third time.

Mr Scotts from artificial turf company Grassman told the ABC that he had been contacted by a few schools that were concerned with the presence of asbestos on school grounds; schools that weren’t particularly happy with the way the education system was handling the problem.

Mr Scotts was highly critical of the method often used to clean playgrounds, knowing as chicken picking. This method involves a team of people in protective gear walking in a line and double bagging any asbestos fragments found.

“They’re just skimming the surface and that is a temporary fix,” Mr Scotts told the ABC.

More needs to be done to make sure schools are safe

Peter Tighe, the chief executive of the Commonwealth Asbestos Safety and Eradication Agency, says that to date government clean up efforts have been insufficient, labelling them bandaid treatments for something which might be a greater problem.

If there’s smoke, there’s fire. If you’ve got an indication that there’s widespread contamination at a surface level, then surely what it needs is further investigation to ensure that there isn’t an ongoing risk to the public.

As outlined on the NSW Government Education & Communities website, the AMP is a reference tool for contractors so they can check to see if the area they are working in contains or may contain asbestos. The contractor is then able to take the extra precautions needed.

The ABC report found that almost 400 schools across the state of NSW had implemented site-specific asbestos management plans. Many of those plans recorded the discovery of asbestos fragments in school grounds and how they were being contained, as well as details regarding the clean-up involved.

According to the ABC, some of the plans stated that the removal, clean-up and disposal of the visible fragments of fibrous cement had been on the ground surface only. Removal was thus limited to the accessible surface areas only. However, there are concerns that these findings could be only the tip of the iceberg.

Airsafe prepares asbestos registers and management plans for organisations of all sizes, from government departments to schools to small businesses. If you need help, get in touch on (02) 9555 9034.

Where can asbestos be found in schools?

Asbestos in schools is more than just a surface issue. While it is comforting to know that attempts have been made to remove visible asbestos fragments from school ovals and playgrounds, such as in the case of Manly West Public School, the threat is one that could run deeper.

Knowing how to spot potential locations of asbestos-containing materials can help parents and teachers maintain a safe environment for students and staff, as well as for members of the local community. Common locations for asbestos-contaminated materials in schools include:

If you notice a deteriorated area in your local school, you can request a copy of the school’s asbestos management plan, or talk to a custodian to find out if it poses an asbestos threat.

Testing for asbestos in schools

You cannot tell whether or not a material contains asbestos unless you test it. For this reason, forwarding samples of suspected asbestos containing materials/products for analysis to a trusted professional is an important part of assessing the situation at your school or workplace.

The result: a definitive answer, on the same day if required, backed by Airsafe’s unbeatable experience and reputation. Airsafe is NATA Accredited for Sample Identification for Asbestos.

If you suspect your local school or workplace may contain asbestos, call Airsafe today on (02) 9555 9034.