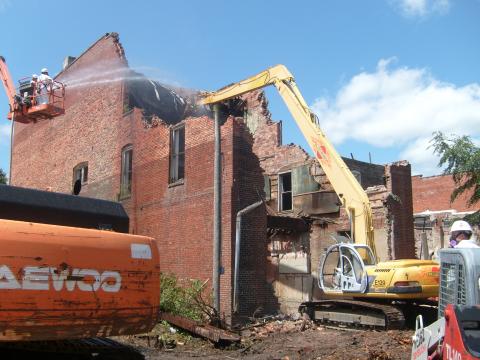 Demolition is currently underway for more than 1,000 Canberra homes contaminated with Mr Fluffy loose-fill asbestos. Among the first of the homes earmarked for demolition are two addresses in Wanniassa, and one each in the suburbs of Evatt, Melba and Farrer.

On 28 October 2014, the ACT Government announced the (Loose-fill Asbestos Insulation Eradication Scheme)[http://www.revenue.act.gov.au/home-buyer-assistance/loose-fill-asbestos-… under which it has offered to buy all homes in the ACT affected by loose-fill asbestos (Mr Fluffy) insulation.

Under the scheme, the ACT Government will acquire, demolish and safely dispose of all affected homes, remediate affected blocks and then resell them to defray overall scheme costs.

But dozens of residents have refused to sign up to the buyback scheme, which ends on June 30. After this date, the (Government’s Asbestos Recovery Taskforce)[http://www.asbestostaskforce.act.gov.au] said it could offer no further guarantees of compensation, and as a result residents may only recoup the value of their land if they go on to sell.

As outlined on the ACT Government’s website, the general eligibility criteria for the Buyback Concession Scheme are as follows:

Is the demolition safe for the neighbourhood?

Asbestos Response Taskforce head Andrew Kefford told the ABC News that in each house the asbestos would be removed internally first with plastic on the roof, followed by external demolition work.

This is an inherently dangerous activity, but it’s also very tightly regulated and one with absolute focus on safety.

Mr Kefford then further explained that the internal asbestos removal would happen first, so that at the point where the task force comes to demolish the house, all the potentially harmful asbestos fibres will have been removed.

The whole of the structure will have been sprayed with glue to bond any remaining, invisible fibres, and the work happens with dust suppression in place so that fibres can’t escape.

ACT work safety commissioner Mark McCabe also told the ABC News that the risk to neighbours, as well as to the broader community, would be very low. “There are virtually zero health risks to the community,” McCabe said.

In early June, the ABC News published an article outlining a rundown of the demolition process. It is as follows:

As stated on the Asbestos Task Force website, air monitoring as well as dust suppression will be in place during demolition and soil on all blocks will be remediated. However, this does not mean all blocks will be cleared. This will depend on the advice of experts as well as discussions with owners if they are seeking to remain on the block.

Is the Mr Fluffy asbestos demolition plan too excessive?

In February, ABC News reported that two leading health experts had raised questions over the ACT government’s plan to bulldoze the 1,000 affected homes in Canberra, calling it “drastic” and “heavy handed”

Dr David Douglas and Emeritus Professor Bruce Armstrong were among the first medical experts to assess the Mr Fluffy homes in the late 1980s. The pair had exposed the health risks of using loose-fill asbestos as ceiling insulation, advising the then Government to “remediate” the homes by vacuuming out the loose-fill asbestos in the contaminated home’s ceiling voids.

Based on their advice, the Commonwealth and ACT governments funded a mass clean-up operation in the late 1980s and early 90s. Approximately 1,000 Mr Fluffy homes in the ACT were declared safe to live in after the clean-up.

What happens after the demolition?

Once the affected houses have been demolished and the land remediated, blocks will be available for re-sale. Homeowners will be given first choice to buy back the land for their own occupation at market value. However, where blocks have been subdivided, home owners will only be offered smaller, sub-divided blocks.

Are you concerned about asbestos in your home?

For those eligible for involvement in the scheme, the voluntary buyback program closes on June 30, 2015. The Asbestos Task Force encourages any homeowner considering whether to take part to contact them to discuss their individual circumstances.

If you are not eligible for the buyback scheme, but are concerned that you may have found asbestos in your home, it’s important to hire a professional to inspect your residence for possible asbestos.

Get peace of mind fast with Airsafe.

If your need asbestos testing, our NATA accredited laboratory uses state-of-the-art equipment to get you a definitive answer. You’ll results quickly—the same day if required—with no additional fees for a fast turnaround.